What is a CPR from https://nofrontierefvg.noblogs.org/no-cpr/
Italian 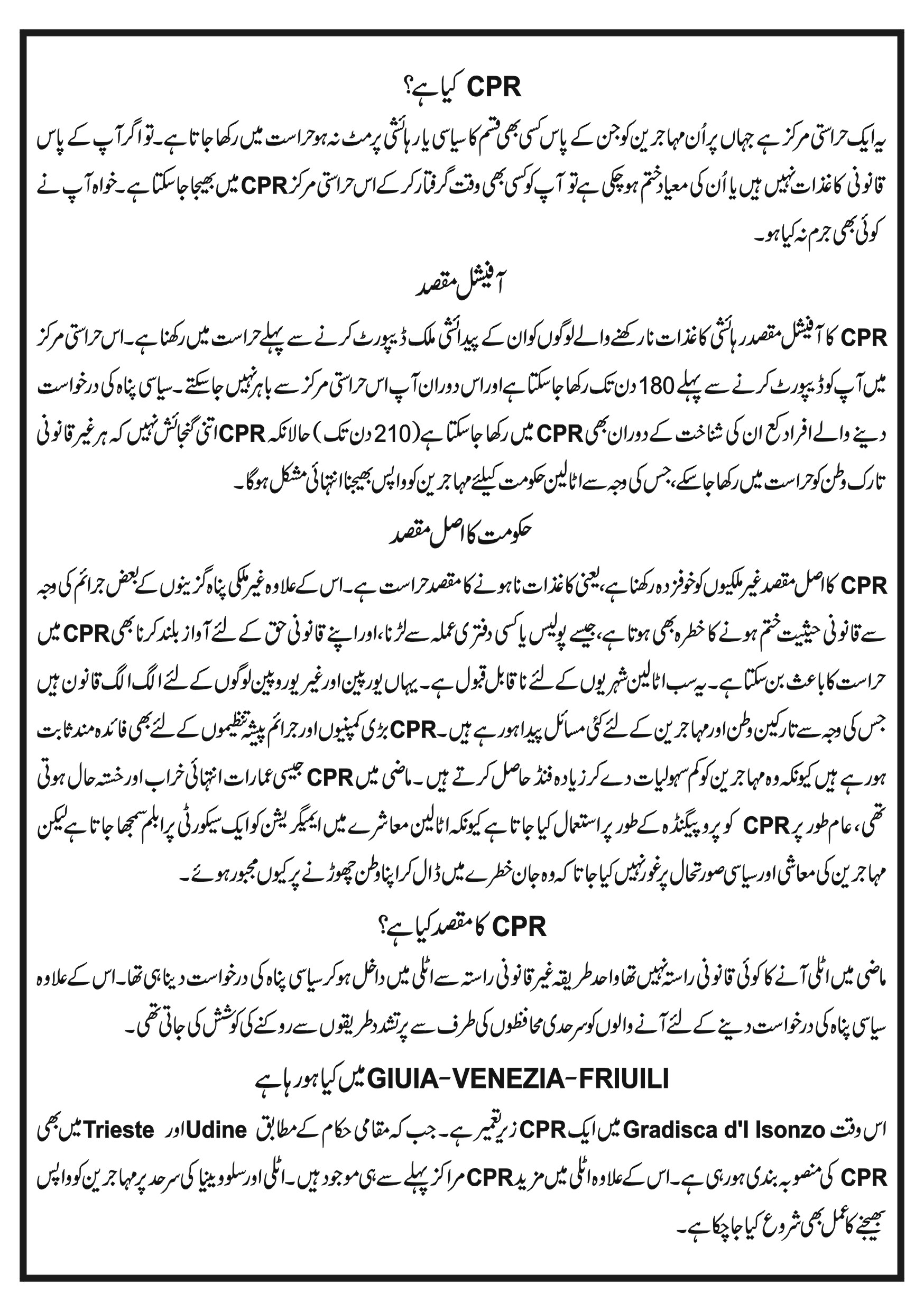 WHAT IS A CPR?

A CPR is a detention building for migrants without residence permit or
political refugee status. So even if you are innocent and you did not
commit any crime, you can be sent there if you don’t have documents or
if your documents expired. OFFICIAL GOAL
The official goal of CPRs is detaining people without documents before
bringing them back to their birth country. People can stay in a CPR up
to 180 days before being sent back to their country. In the meantime,
they are forced to stay there and they cannot go out. Asylum seekers can
also be detained in CPRs during their identification process (up to 210
days). CPRs, however, haven’t got sufficient capacity to imprison every
person without documents, and sending migrants back to their countries
of origin might be very difficult for the Italian government.

The real goal of CPRs is keeping foreign people in a state of fear: no
document could mean prison. Moreover, foreign people are always at risk
of losing their asylum status for committing certain types of crimes,
among these fighting with the police (threat or violence against
officeholder): simply advocating for their rights could become a pretext
to hold them in a CPR. This is impossible toward Italian people.
There is a difference in legal and work rights between Europeans and
extra-European people, which creates the conditions for the exploitation
of migrant workers.
CPRs also represent a substantial economic opportunity for big companies
and criminal associations, as they can take funds for services they
don’t actually offer to the migrants. In the past, migrant conditions in
detention buildings similar to CPRs were horrible.
CPRs are merely propaganda for the Italian society that looks at
immigration as a security problem, without considering the role of
western countries in the economic and political situation of the
migrants’
countries of origin.

WHY DO CPR’S EXIST?

For years, a legal way to come to Italy has not existed. The only way is
to travel illegally and then apply for refugee status. In addition, the
possibility of applying for refugee status is obstructed by border
guards that push migrants away after beatings and violence (push-backs).

WHAT IS HAPPENING HERE IN FRIULI-VENEZIA-GIULIA

Right now, a CPR in Gradisca d’Isonzo is under construction, and others
in Udine and Trieste are being planned, according to local authorities.
Other CPRs already exist in Italy. In addition, push-back practice near
the borders has begun also between Italy and Slovenia.